As I continue my way through assessing Active Directory privileges without commercial software, I am constantly reminded how complex of a task it is. While determining the objects a single user can control is quite straight forward, finding all paths leading to the compromise of privileged principals can be tricky on a large domain. It is also apparent that in order to successfully do so, one must possess a strong understanding of the analyzed data, especially its weaknesses, or be at risk of reporting erroneous findings.

This post is dedicated to presenting the root cause of real-world scenario where if I did not take a close look at the data, I would have documented twice too many users with a path to domain administration privileges. It also includes a proposed solution so that you can also avoid it.

The Questionable Duality of Contains

BloodHound’s Contains edge aims to describe attack paths both from GPOs, and the potential of descendant objects inheriting permissions. Unfortunately, this cannot be achieved without introducing false positives as will be demonstrated. 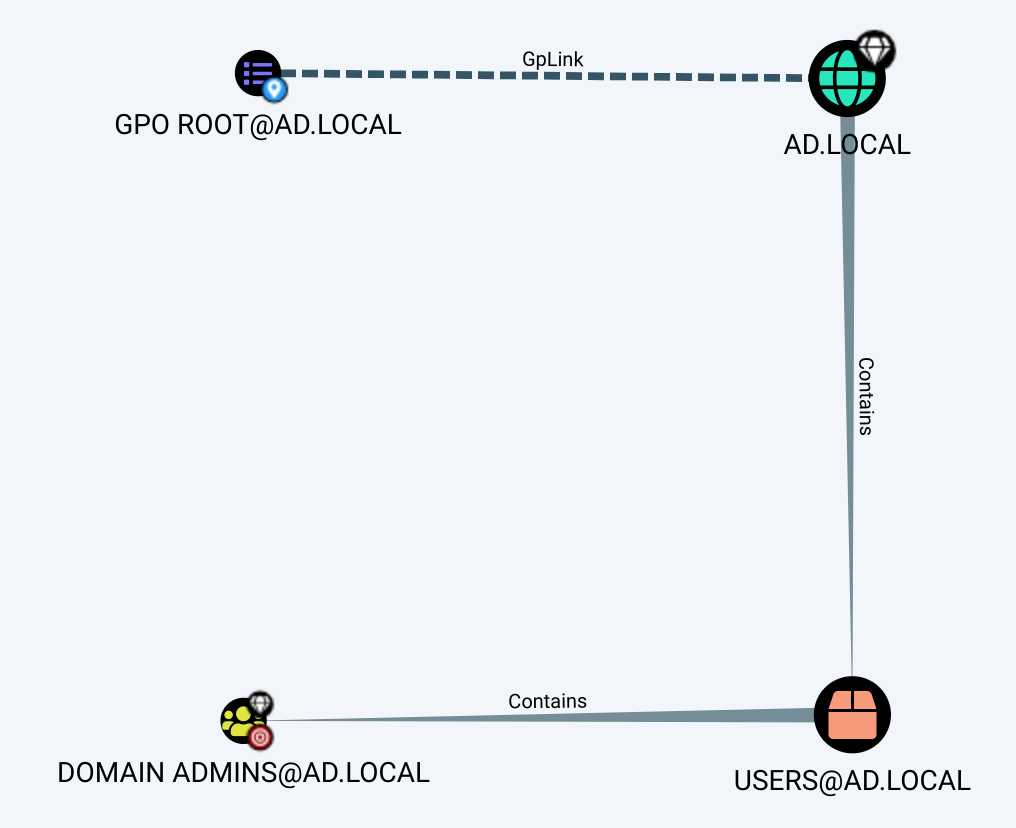 The GPO GPO ROOT@AD.LOCAL is linked at the root of the domain, but is not enforced as denoted by the dotted GPLink edge. This signifies that if a domain or OU in the path blocks GPO inheritance, it will not go down to the object that we wish to compromise, which would also be shown in the graph with a dotted Contains edge. Note that this is an entirely different concept than ACE inheritance, and typically does not matter much due to the possibility to enforce the GPO, resulting in a complete disregard of any blocked inheritance. In this demonstration, it is safe to ignore the state of the link, but is worth understanding.

Further down the path, the domain contains the well-known container USERS@AD.LOCAL that itself contains the group DOMAIN ADMINS@AD.LOCAL. Therefore, the Contains edges allow us to map that due to the GPO being linked at the root of the domain, it can use a filter that would apply to the members of the group that we want to compromise.

So far so good; no potential false positive in sight.

Let us look at this next path:

It is claimed that since the group CL-UNI-ADMINGROUP1@AD.LOCAL has GenericAll over the container where the group DOMAIN ADMINS@AD.LOCAL resides, it can be compromised. The idea would be to create, on the container, a new ACE that applies to descendant group objects, effectively awarding yourself privileges over the group; however, this is simply not possible since Domain Admins is a protected group.

Protected accounts and groups is an Active Directory feature that applies to specific high privileged accounts, groups and their members to ensure that no unwanted principals get privileges over them. An object named AdminSDHolder serves as a permissions template that overwrites protected principals’ permissions every 60 minutes by default. Unless modified, this template has a very important property: it is configured to disable ACE inheritance.

Now, going back to the example above, DOMAIN ADMINS@AD.LOCAL does have ACE inheritance disabled, rendering the path impossible.

This leads to an interesting situation: in the context of a GPO, it is safe to trust the Contains edges, but in the case of an ACE that must be pushed down, they may yield false positives.

Working on a Solution

In the previous section, we have established that any principal with ACE inheritance disabled leads to a false positive when an edge expects to compromise it that way. As such, deleting the Contains relationship would solve the issue, but would also introduce a blind spot in the case of a GPO; nonetheless, it is clear that the relationship is problematic, and must be dealt with.

When importing the output of the collection method DCOnly into BloodHound, the data set does not include the inheritance state of objects but fortunately, the collector does gather that information, and stores it in the JSON files that are ingested:

Since the desired information cannot be found once imported, it means that the ingesting routine must be modified.

In the release version 4.2.0 of BloodHound, the file src/js/newingestion.js contains a node creation function for each type of objects located in the JSON files. Since all these objects have the property isACLProtected set in the collected data, we can simply update each function using the same principle that will be shown. As an example, only the buildGroupJsonNew function will be updated.

Before the queries.properties.props.push function call, add the following two lines:

All that is left is to compile the code. This can be achieved easily using the third-party Docker image electronuserland/builder as such at the root of the edited BloodHound project:

Once the compilation is complete, the newly created directory BloodHound-linux-x64 contains the compiled binary when using Linux. Execute it and import your data as normally done. Feel free to open up the developer console by using the keys Ctrl+Shift+I to find out if any errors were encountered during the import.

At this point, nodes have the new isaclprotected property set, but relationships must also be adjusted to eliminate false positives.

As briefly mentioned earlier, deleting the Contains edge when ACE inheritance is disabled resolves false positives, but breaks paths from GPOs. Despite this, the edge must be deleted in that situation, so a way to restore paths from GPOs is needed.

Before executing any of the next queries, make sure to either backup your database (if you have the Enterprise version of Neo4j), or to have access to your collected data to avoid any misfortune.

In cypher-shell, execute the following queries:

The idea is to add a new edge, here named DescendsTo, to link GPOs to all objects they can apply to that have ACE inheritance disabled. In a large domain with some GPOs linked at the root of the domain, this may yield a significant amount of newly-added edges, but does not matter much in my experience.

Now that we have linked GPOs to the objects where the path would be lost, we can go ahead and get rid of the Contains edges that are false positives in the case of ACE inheritance:

On all types of nodes that can contain other nodes, we delete the Contains relationship to the contained node when its ACE inheritance is disabled, successfully removing false positives.

Note that the ingestor could be modified to execute these queries at the end of an import to avoid this manual process.

After the previous manipulations, the GPO path described at the beginning of this post gets reported as such, but has two negative points:

Regardless, in my situation, these downsides are significantly easier to deal with than attempting to manually filter out false positives.

As our last validation, we query for the false positive mentioned earlier:

No path is returned due to the Contains edge getting deleted in the last section, as DOMAIN ADMINS@AD.LOCAL has ACE inheritance disabled.

In this section, we diverge from the Contains edge, but remain on the topic of false positive reduction. Depending on your use case, you may be perfectly fine with ignoring the following edges, but in my situation they were problematic.

Prior to version 4.2.0, a singular edge did not exist to identify a principal with DCSync privileges; the analyst had to query for both GetChanges and GetChangesAll. Now, the DCSync edge is created post-processing when the aforementioned privileges are identified. This is convenient, but the GetChanges and GetChangesAll edges are not deleted afterwards, meaning that you may retrieve a path where a principal only has one of them, inducing a false positive.

For this reason, during my analysis, I delete the GetChanges* edges, but be aware that this has downsides. Consider the situation where a principal has GetChanges, but not GetChangesAll. If they have GenericWrite on a group that has the missing GetChangesAll, they could add themselves to the group and be able to perform the DCSync. If you delete these edges, you would end up missing this possibility.

If this fits your use case, you can delete the potentially false positive-inducing edges like so:

Consider the next query and the resultant path:

The DCSync and Contains edges are accurate, but the trust mapping acts as if it awards privileges to push ACEs down the AD2.LOCAL domain object, which is absolutely not the case. A trust itself is not enough; WILLIAM_STEIN@AD.LOCAL would need to have been given privileges over AD2.LOCAL to successfully leverage this path.

The easiest solution is to get rid of the TrustedBy edges:

If need be, you can reimport the *_domains.json file from your BloodHound dump to restore the trust relationships.

While the proposed solution has negative aspects, it offers the peace of mind of knowing that the Contains edge will not introduce false positives. As I deem the fix imperfect, I will not be proposing it to the core of BloodHound, but recommend it to anyone assessing privileges at a large scale.

I would like to thank marcan2020 for his contribution to the solution, and the BadBlood project for filling up my directories with plenty of data to play with.